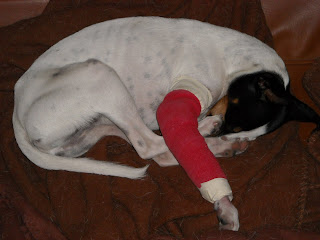 This morning Bisou had her surgery to remove the plate. It went superfast and an hour after I left her I held her in my arms again waking up. She recovers greatly from the narcotics, threw up a bit after drinking some water, but is really doing great. She has a bandage with small wooden splints but she is walking, trotting, really like there were nothing. I am SO GLAD! Thanks for coming over! Tina
0 comments

This morning an hour of my precious time was stolen again by having to put the clock from 2 am to 3 am in an instant, called summertime here, aka daylight saving time. Now it is dark again when I get off for work but I do appreciate the evenings – more time to be outside in the garden or with the doggies! Oh and today is the first anniversary of Myrtilles adoption day! I am so glad we found her on the huge www! 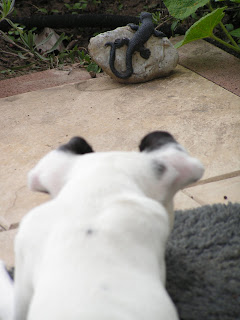 Thanks for coming over! Tina
1 comments

a few pics - first the living room window with the forsythia we put there right outside in a large pot on the patio, together with a buddleia. Great idea! 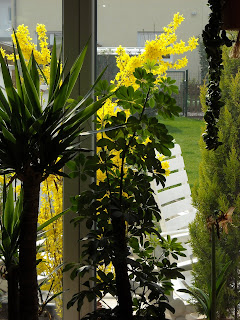 And then I went for a walk with the doggies, so many signs of spring now! 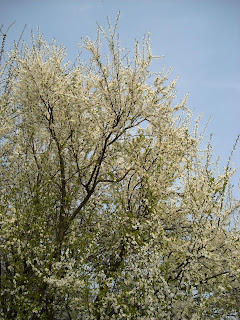 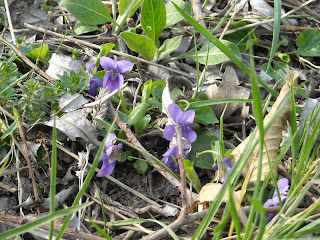 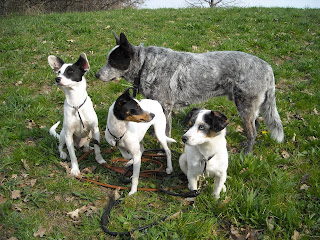 Thanks for coming over!
Tina
1 comments

The good: Bisou's leg has healed greatly. X-ray shows great bone structure where the fracture was. The plate can come out. This leads to the bad news: The plate has to be taken out! Surgery sucks! But I see the need it has to be done so there will be just some sorrowing for a few hours while she is being operated, then a bit hurting for a few days (I know she gets a good dose of painkillers but still she will be in pain) and then she will be able to have her happiest of happy doggy-lifes! She is so cute playing with Myrtille! Thanks for coming over! Tina
0 comments

at least that would be her name now if our home's name were her kennel name and if in Germany it were common to write earned titles behind dogs' names :-) I am so proud of our little baby: she just passed her "Begleithundprüfung", or "BH", an obedience and "behaviour out in the daily-life-traffic" test, that is the basic test over here (like "Companion Dog" or "Good Canine Citizan") and needed for being allowed to compete in the different dog sports (in some clubs to even train for those sports). For this test the dog first has to prove that she's ok with a stranger reading out her chip data, and he might also touch her or have a look at her teeth. Then comes the obedience part: while another dog lies at the edge of the lawn she has to do heelwork (straight on, with right angles to the left/right and u-turns), with "sit" on body cue (human stops), with "sit" and "down" on command (while the human keeps walking) and coming back "here" to sitting in front of you without command and then going back to the heel position on command - as well as heeling through a group of people in a figure eight, stopping close to a person without embarassing or being afraid of the person - both on and off leash. She also has to lie down at the edge of the field, unleashed, while her human goes away 30 steps and stands there with his back to the dog and while the other dog does his heelwork. There is a large circle marked and the dog has to stay in the middle of it. When all the dogs taking part in the test on that day have done this part, those who have passed so far and shown that they are "obedient" in a confinded area are going outside of the dog-club-ground to check how they react to everyday-life situations as walking on the sidewalk while some people on a bike, on a scooter, with inline skates, or a runner are passing by and coming from behind, someone stops with his car and asks for directions, even hits the horn, cuts off and restarts the engine with the dog close to the front of the car, dog is tied somewhere, his human out of sight, while another dog is led close by, has to walk close by another tied dog. Dog should be neutral to everything and stay on loose leash (no correct heeling needed). Myrtille did so fine in each part! Which I think is really great, as the obedience was early in the morning, the grass was still wet, frozen in the shade, which she didn't really like... And at the edge of the field there where bushes with birds and rabbits and squirrels playing and still she was a very good girl... And even when her "partner dog" (the one who walked while she was performing her long down-stay) went off to have fun with those critters in those bushes and was called back loudly and came just to pass his handler and take off in the other direction and was called back even louder and harder... And - dogs have to be at least 15 months old for this test, which she just got at the beginning of march! So no one would have been mad at her if she would have had failed but instead we are really really proud of her!!! Oh, and before you ask if it was me who took this test with her - no I didn't, Sweetheart did, who will train her also in agility. I am too much of a nervous wrack when it comes to stuff like this - I passed this test with Dingo (we failed in our first try because he went off to play "catch me" when we started the off-leash part because he could feel how nervous I was) as well as with Josy because Sweetheart was sick that day - that's enough for me and it feels like it was ages ago... After I had done the basic training with Myrtille, mostly with clickertraining, at home, in the garden, in the street or during walks, then Sweetheart took over and trained with her. And they did a great job! 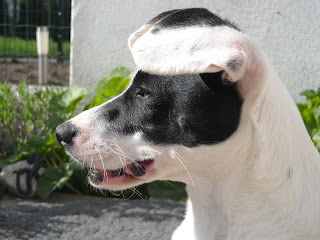 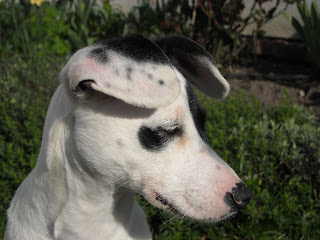 Love each one of her "two faces"!!! P.S. Oh and all humans have to pass a written test before being allowed to start the obedience part of with their dog , or have to have passed it during the last five years. Lots of questions like for example about canine behaviour, how to behave when meeting other dogs or persons outside with your dog, medical issues, or legal things. That was a LOT of text... hope you enjoyed reading! Thanks for coming over! Tina
1 comments

Hey there, thanks for showing up after this long time of silence from me!

As I have to commute by bus/tram in the morning and sometimes in the afternoon at the moment I have cast on and even finished a few small portable projects. Pictures aren't good yet, nothing's blocked yet - but here you are! 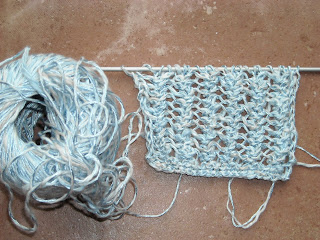 This is a lacy scarf from a pattern called Morning Snack Scarf in a light blue and white viscose-cotton mix called Savanna by schoeller+stahl. 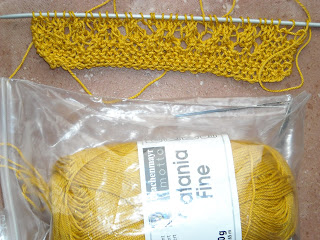 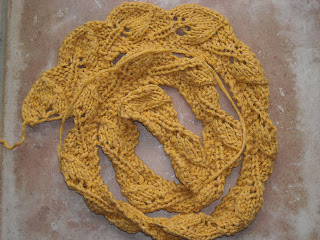 This is a leavy scarf made from thicker cotton yarn. Unblocked but you can see how the leaves show up at the top of the picture.


So these are my latest additions to my small but growing (there are some more single balls in the stash that I got for just 1 or 1.5 Euros) decoratif but not really warming spring and summer scarf collection. 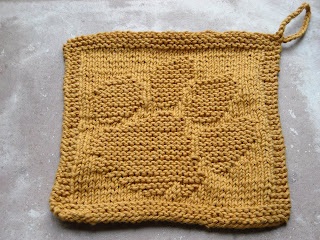 This Bisou's paw cloth. Every doggy needs to have her and his own, don't they! In reality this colourway looks less like mustard as it shows in this picture on my screen but fits perfectly with Bisou's tan marks :-) 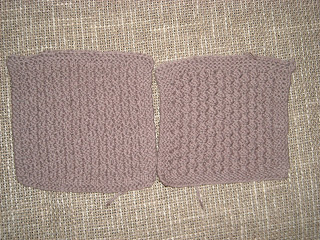 And then there are two dish cloths in a gorgeous soft cotton yarn in the colour of hot chocolate, one is called Blackberry pattern, the other one is just a knit two purl two that I made up on my own because I had finished the Blackberries in the morning and needed soemething to knit for the way home. Like them both, they scrub well with there textured surface.

Oh and see, spring is round the corner: 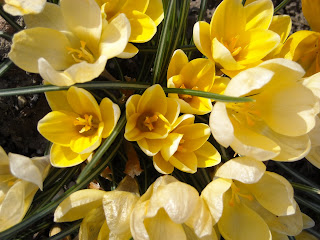 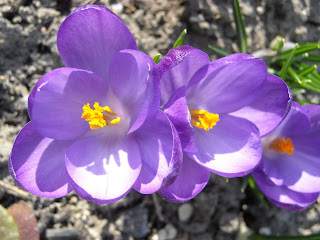 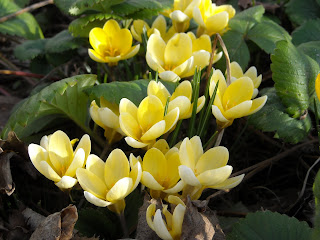 Thanks for coming over!
Tina
3 comments

A hint of spring thanks to the crocus! 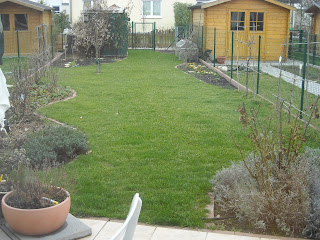 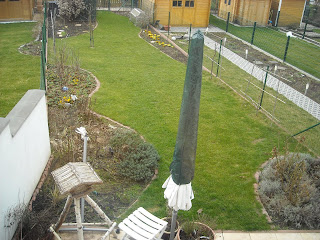 Thanks for coming over!Tina
1 comments

Tina
I love knitting, crocheting, learning to spin, gardening, taking pictures, and I love my doggies of course... I am born in '69, I'm German, and living in the beautiful Palatinate in south-western Germany, sometimes referred to as "German Tuscany".